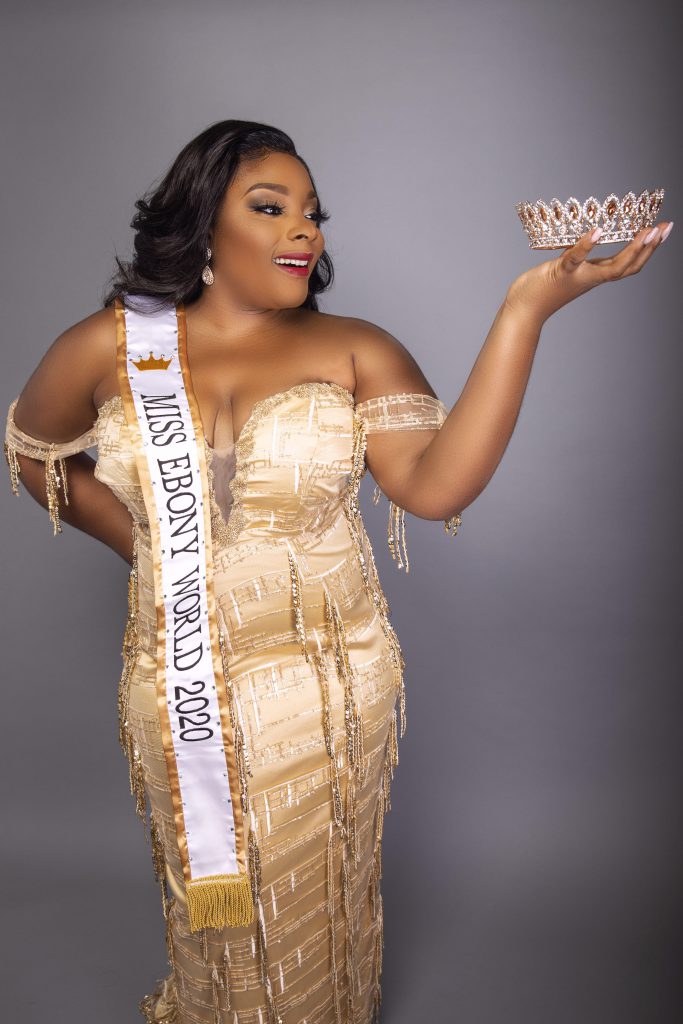 The stunning, beautiful Nigerian-American, Stephanie Nwogu who was raised in the MD/DC – Metropolitan area emerged winner on the Miss Ebony World virtual contest on July 27th 2020.

Queen Stephanie is born of two Nigeria natives who migrated to the United States over 35 years ago. With an educational background in Political Science and Information Technology, Stephanie is a Sr, Database Manager for the Unites States Department of Veteran Affairs and currently mentors at an international training program, whose purpose is to equip individuals with a wide array of interpersonal and technical skills as they transition into IT sector.

Stephanie was able to hone in on her creative skill-set as a long-time event planner/coordinator to educate and improve community awareness on cultural issues that impact the sustainable of the Igbo people through social outreach and engagement. Miss Nwogu currently serves an advisory board member for this initiative.

Some of her many hobbies include extreme sports, like rock climbing and writing literary works such as short stories and poems.

Being heavily involved in performing arts, Stephanie plays the violin and piano. She has performed with award-winning orchestras and other musical ensembles at the John F. Kennedy Center and the former president of the Unites States, George W. Bush during the White House’s annual, Teddy Bear Ball. Stephanie has a passion for justice, human rights and believes in equal opportunity for all. She also loves adventure and takes pride in her African heritage, which has shaped her into the woman she is today

Platform:
Stephanie’s life work is centered around redefining the face of Africa through social innovation, economic development, and industrial-tech reform. Through her platform, The S.H.I.N.E. Africa Project, her goal is to provide a wholistic-mentorship to equip eager and bright minds all over Africa and Diaspora.
S.H.I.N.E. is an acronym that stands for Service, Honor, Innovate, Network and Empower Africa and its next generation. This framework brings to light the greatest resource Africa has, its people. Her initiative will ultimately provide and bread countless home-grown job opportunities for the entire African nation.
Africa has some of the brightest talents in the world. However, according to Trading Economics.com, 72% of African nations have an unemployment rate greater than 5%, leaving 1 out of 20 people unemployed. The remainder of its nations has an unemployment rate above 20%, this even includes my ancestral homeland of Nigeria with a rate of 23.1%. Meaning at least 1 in every 5 people have no legitimate source of income. An article, endorsed by the United Nations stated, Africa’s youth, those between the ages of 15 and 24 are at least 200 million in number.
The unemployment rate for this age group alone, is at a staggering 25%. As a result of lack of government involvement and forward movement, along with other mitigating factors (such as financial crisis, lack of entrepreneurship and life-skills education, as well as digital divide) youth unemployment continues to be a raising epidemic.
Her project insights social change by aiding youth and young adult Afro-natives, first generation and those within the Diaspora who possess talent but lack the necessary resources such as funding, training, and mentorship to abundantly thrive. With S.H.I.N.E, she helps our youth create entrepreneurial ventures and tech-driven start-ups geared toward enhancing the economic structure and development of African countries as well as within the Diaspora; all while maintaining core traditions, heritage, customs, and values.
In the S.H.I.N.E. Africa Project,
We provide Service: (by) Serving the people in the land that has ALWAYS served us, THROUGH training and mentorship taking ownership of our destiny.
We Honor: (by) Shedding light on our heritage and diverse cultures, while embracing the beauty in our differences.
We Innovate: (by) Fueling forward movement, utilizing today’s technology to foster groundbreaking solutions to (for) Africa’s most pertinent issues.
We Network: (to build) by bringing together talents and strengthening connections between forward-thinkers whose main objective is to grow and develop Africa and the Diaspora, because together we can go far.
We Empower: (by) Allowing the best minds to thrive. SHINE AFRICA SHINE!